The Pixelmon Auction system has been launched which will bring a safe method of trading pixelmon for pokecoins.

This system will work directly with your PokeCoins ingame and works with the command /sell 1-6. Once you stored a pixelmon to sell on the pixelmon auction you can go to pixelmoncraft.com/auction to find the auction page. Here you can put your pixelmon up for auction on the Sell a Pixelmon page.

Before you can purchase or put up pixelmon for auction you have to confirm your ingame account with /confirm. And when you succesully purchased a pixelmon this pixelmon will become available directly in /claim. The minimum price of a pixelmon is 50pc and the auction fees are 10pc, you pay the fee if you buy a pixelmon or cancel an auction.

On your profile and other user's profile pages you can find a listening of pixelmon auctions per player.

This system works with a Terms of Service agreement which you will have to accept every time you make use of the pixelmon auction. pixelmoncraft.com/tos/

When will it be open for public?! :O

Looking at the preview:

Will work with minimum of 50pc and auction fee for the buyer of 25pc extra, so putting a pixelmon up for auction for 50pc will make the buyer pay 75pc.

To cancel an auction it will cost the seller 25pc auction fee to cancel, so no free ev/iv checking ;)

Maybe in the future i will add a average pc feature.

Which Pixelmon auction? Not all Pixelmons have IV and EV values.
If you found something wrong please report more information.

I've checked more then 30 pixelmon and everyone has 0 iv values.. exept for one.. who has 255 iv values, exactly the same as the ev values.. That's why i'm saying that iv just copies the ev value.

Check this for example

Its fixed now.
We thank each bug reporter with "Bug report" title. You can select your title on your account settings.

Just a request, but could the names of the sellers be shown on the main page of the auction? Similar to the Item Auction. I think it would make buying pixelmons from a specific person much easier.

Go to that specific user his profile page and you will find a auctions tab with his auction listening, at your own profile page you can find your own pixelmon auction tab as well.

Did NOT see that at all. Apologies ;_; That's fricking awesome :3

Why are the player names not on the main view?
Beauce its not important from who you buy the pixelmon. If you want to filter on player go to the player profile and hit the "Auction" tab. Like lemon said

Top
#15
Is it possible to add something so you can also filter it if it is ev trained or not?
Top
#16

It already does give the Effort Values of the pokes?

Top
#17
That is true but if you are looking for a ev trained pokemon you have to scroll by every single pokemon page. It would be nice if it could be filtered.
Top
#18

I've had some trouble returning the pokemon to my pc when i hit the "Return a pokemon" button it just gives me a white screen.

Same here, which means there is an error on the return page.

Was checking the accuracy of the ev's and came across this 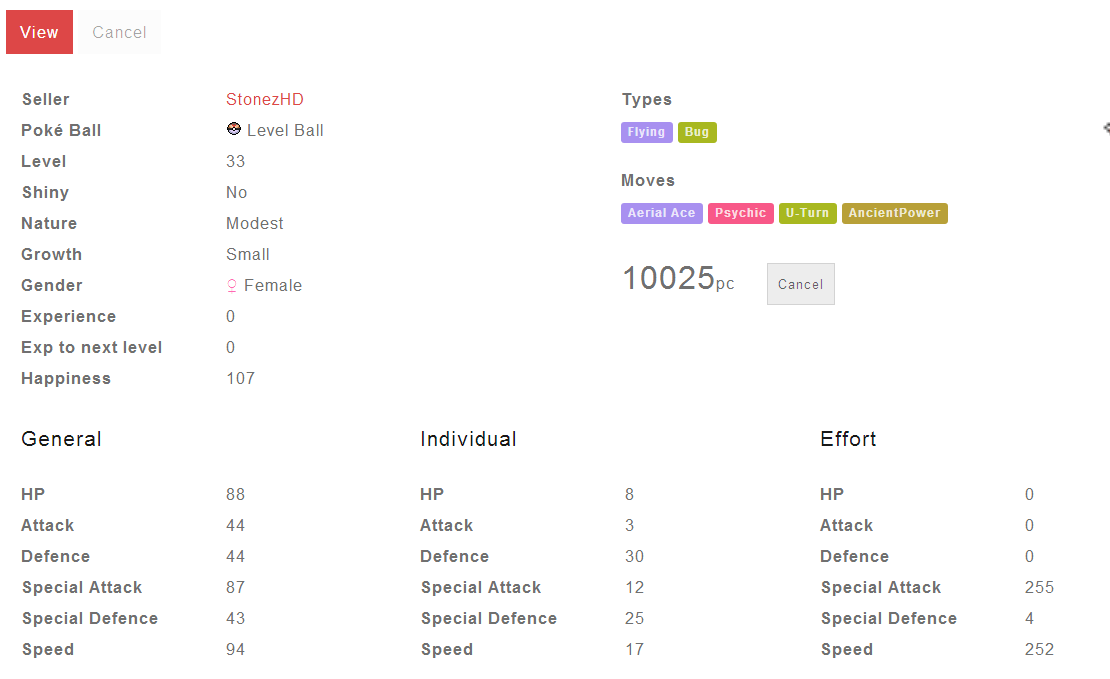 Btw, is it possible pokemon duplicates due to the auction?

I came across those 2 pokes...

Are those poke really 2?

The auction shows 2 poke for some sort of bug but actually the poke is only 1?

The poke got duped due to some auction bug?

Evs, ivs, natures, sizes, moves, shiny, genders, prices and the seller are exactly the same.. Too much of a coincidence :V

The first day the auction came out i've seen something like 10x enormous adamant rayquaza. I didn't check the seller and stats but.. 10x adamant enormous rayquaza, suddenly removed from the auction 10 minutes later, at the same price... seems too much of a coincidence too.. :) btw, i really didn't check, it could be a coincidence....

And stonez, i guess it's not a bug.

All the math behind "numbers" in pokemon it's %, but the pokemon and the pixelmon games calculate it in a different way.

I could be wrong but i guess i'm not, this is what i think it's happened to your poke:

You did only 3 points ev training in special defence or maybe even 0 but the game can't understand why you have 43 instead of 42, probably becouse the formula used to calculate is a pokemon formula, not a pixelmon one. So, the game notice your poke should have 42 and thinks you did 4 ev trainings in sp. defence to reach the 43.

You can notice the same "problem" checking ivs. Many times i was checking ivs and ivs calculators told me "you can't have 25 in that specific stat.. its 24 or 26.. It happened to me many times so i though it could be a problem of rounding off.. It was proved leveling up my pokes. If you exactly have 31 ivs in a particular stat, it could be at lvl 100 to have 1 more point then the maximum for that poke.. I can't remember who, but someone told me: My adamant gliscor has 318 attack at lvl 100 and it's impossible.. gliscor can have at most 317 with 31 iv and 252 ev training. This happened becouse on pokemon game, gliscor has something like 317,xxxxxx and in pokemon becomes 317, in pixelmon becomes 318. Very simple ^^

Back to your problem, u probably trained your poke 255 and 255, special attack and speed but the game just cant understand why you have 1 more point then normal in special defence and it thought u trained your poke 4 ev points.. At the same time you can't have lesser then 252 and 252 in special attack and speed becouse of your sp.attack stat and speed stat and that's why it was forced to show 1 more ev training.

I can't still understand why it took 3 points from you ev speed training instead of taking both speed and sp. attack, showing 252, 4, 252.

Btw, as i told you, it could also be for other reasons, i'm sure about iv's and i just thought it could be the same problem for evs.

I guess that user is just putting up two pixelmon up on the auction , that were once bugged.

I really love this system , thanks for implementing it !

Sorry if I made anyone jealous ^^

How do I add pokecoins to my auction account?

This system will work directly with your PokeCoins ingame.

Only for the item auction you have to put money online first on /auction.

So far 1427 pixelmon have been bought/sold on the pixelmon auction. And there are currently 2614 pixelmon for sale. http://www.pixelmoncraft.com/auction/

i was just looking at the auctions i really like it allot but then i came across this .....pokemon?

Its just another one of White_Sheep's tricks ;)

someone should buy that sheep and see what happens :P

Best, when you try to, you get this message: 'You can not buy the White_Sheep because he is is the developer of this auction.'

When life gives you lemons, check if one of them is Lemonita.

If it is, you have just successfully kidnapped Lemonita!

Minecraft is like icecream. There are all different kinds, but vanilla is usually the best.

The pixelmon auctioning costs are temporarily reduced to 1 pokecoin for a promotion!

"When life gives you lemons, check if one of them is Lemonita.

If it is, you have just successfully kidnapped Lemonita!" ~AzureSkyheart

Fixed the issue where if an user had put over 7000 pokemon in the poke sell bank, the page would not load anymore, this is fixed by a limit of 500 pokemon shown on the sell and return page.

Note: It is simply not adviced to put that many pokemon in the poke sell bank.

Update: Added the following abilities to the pixelmon auction.

Once again some of them have space in between- reverting back to what Yutolio said. Unless both the Pokemon and the list of abilities have a space, it won't work.

Removed all spaces, does it work?

I haven't actually tried all of them, but they all work, apart from a Big Pecks, which still has a space.

Can you finish helping on my auction posts Lemonita?
http://www.pixelmoncraft.com/forum/topic/4757

I did already, and i can not help you either you sell those pokemon in batches of 500 or i can delete all pokemon in the bank for you.

What, them all? No I have good shinies, legendaries and stuff there. I thought that coping and adding a page system to it like the one there is at buying browsing wouldn't be difficult. I assume I was wrong then...